I just couldn’t let this day end without writing a movie review for this new Walt Disney Pictures musical film entitled Frozen. There’s something special about it and I really would like to give my share of thoughts. My sister along with our younger cousins watched it few times already since December but I was ignoring them. I am really not a movie fan because I just find most movies predictable. So okay today I finally decided to watch it since I am 3 months outdated with this Frozen mania, fever, madness or addition.

The whole process and brainstorming to complete Frozen started since 1990’s but there were many failures and rejected versions. It was confirmed that the story was inspired from The Snow Queen, but there had been difficulties to convey the story towards the modern audiences. So the only Snow Queenish thing in the movie was the ice, snow and queen. Finally, it was December 22, 2011 after the success of Tangled when they announced about the release of another animated film entitled Frozen on November 27, 2013. There had been a great approach done to know how it was really like to be growing with sisters, the way that Elsa and Anna had to portray in the film. Disney even held a “Sister Summit” to be attended by everyone in Disney Animation who grew with sisters around. 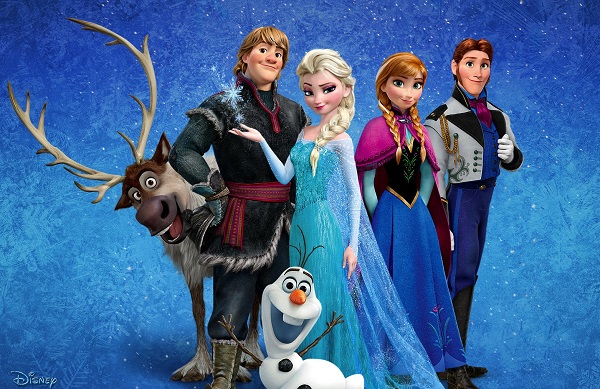 Plot of the Frozen Movie 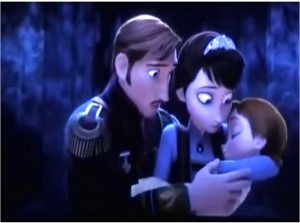 The King and Queen of Arendelle had two children, both girls named Elsa and Anna. The family knew Elsa had this gift, a magical capability to create ice and snow but never thought it could be harmful until one fearful night. The girls were on their usual play but Anna was so jolly and enjoying everything about the magical snow then Elsa slipped and accidentally hit her sister with ice on the head. The King knew exactly where to find help, but unaware something must be done to avoid this kind of harm again. They rushed to see the trolls that helped them thaw Anna’s ice-cold head but all magic must be erased from her memories and it’s the best for the family and even to the entire Kingdom of Arendelle.
Princess Elsa’s ability will only grow stronger so she was isolated from the people and to her sister Anna. Seasons after seasons, the sisters never had the chance to be together again making them both lonely. The King and Queen died while travelling on a ship one stormy night. The sisters were just so helpless of what awaits for them, especially they can’t even be together to give comfort. 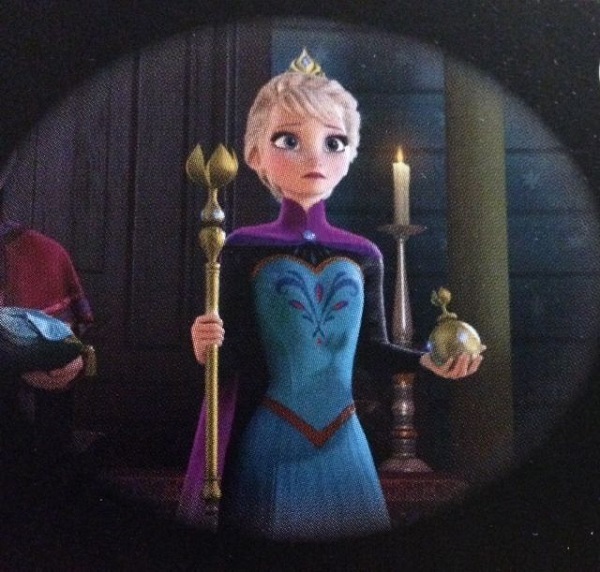 Finally, it’s Princess Elsa’s coronation day as Queen. Anna is so excited, for a long time of being isolated from people while Elsa was anxious, for one wrong move will screw up everything. While strolling around, Anna met Prince Hans of Southern Isles. They had great time knowing each other and thought they were mutually attracted so they asked for Queen Elsa’s blessing for their marriage. 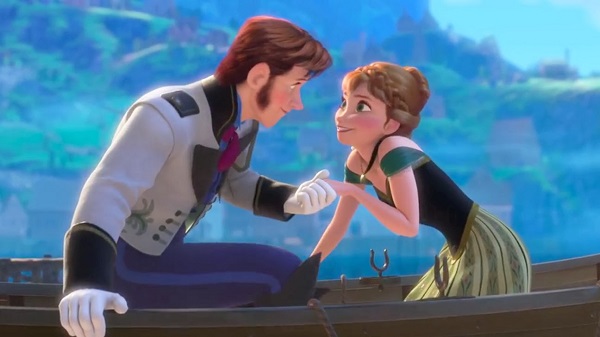 Queen Elsa refused to the wedding that made Anna confront her for shutting off people even her own sister. The argument flared up Elsa’s emotion causing her to expose her magical gift. Anna was so shock as well as the guests while the Duke of Weselton believed this was kind of sorcery.

Queen Elsa in her mixed-emotions of fear, anxiety, anger and loneliness left the palace and decided to find some place where she belongs. Her ability to create ice was so powerful that she was able to build an ice palace in the mountains. 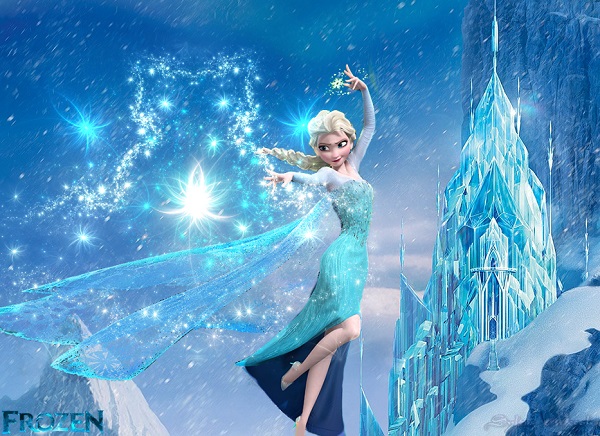 She was so happy about it, being away from people where she can be who she is not knowing it was also causing winter in Arandelle even when it’s supposed to be summer.

Anna left the palace in the care of Prince Hans. She struggled to look for Elsa with a mountain man Kristoff and his reindeer Sven.

Along the way they met a snowman named Olaf created by Elsa during their childhood. With his help they found their way to the ice palace. 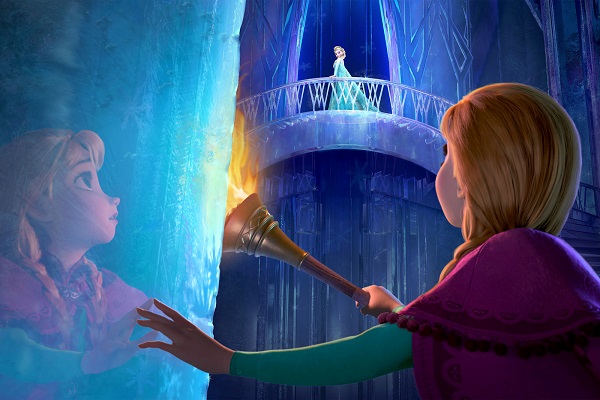 The sisters were united but Elsa refused to go home and insisted she doesn’t know how to bring back summer. Emotions burst out between the sisters and Elsa unknowingly hit Anna with snow in her heart. She created a huge snow man to drive off Anna, Kristoff and Sven. Anna was feeling ice cold so Kristoff said he knows who could help them. The very same creatures, the trolls couldn’t help Anna anymore since the heart was affected. The head of the trolls said only an act of true love can save her. Kristoff thought he was to bring Anna to Prince Hans for a true love kiss. While on their way to the Arendelle, Prince Hans and some men also found Elsa in the ice palace and upon seeing her abilities, they brought her back to the palace and made her a prisoner. 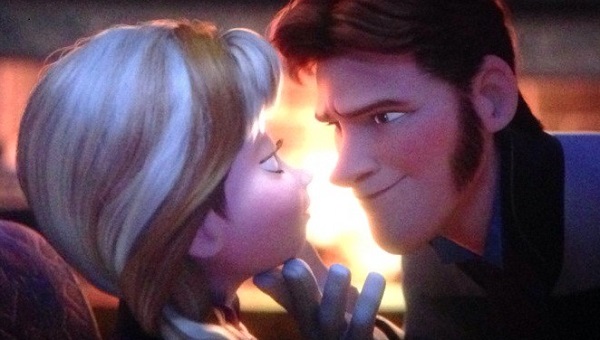 At last, Prince Hans and weak Anna were together and about to have their true love kiss until Prince Hans refused to do so. He realized he wanted more than just being married to a princess. He wanted the entire Arendelle having Queen Elsa imprisoned and even left Anna dying. Then Anna realizes he didn’t really loved her and so Olaf told her Kristoff must have love her since he brought her to Prince Hans at rush so she could live. He was so concerned for her. So now Anna and Olaf must find Kristoff for the true love kiss.

Queen Elsa fled from the prison and went out the palace. Prince Hans found her and said Anna was dead because of her. Elsa was in despair, making the weather also calm and sad. She was crying for her sister. Anna saw Kristoffe close to her. 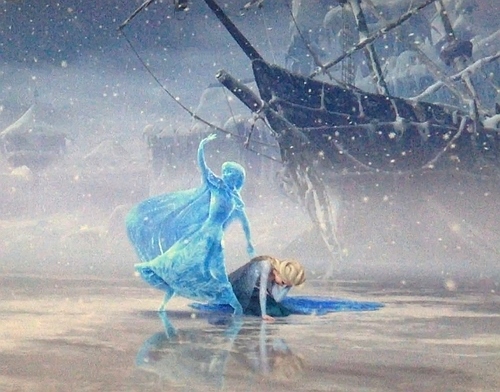 Anna was already dying and knew she needed an act of true love from Kristoff but instead of the chance for a kiss, she runs towards Elsa because she saw Prince Hans is about to kill her sister. The very moment when she turned to solid ice so she indeed saved the Queen from Prince Hans’ fury.Elsa hugged her solid-ice sister and cried then Anna thawed. Just like what Olaf said, only an act of true love can thaw a frozen heart. It wasn’t the romantic love between Anna and Kristoff at all; it’s all about sister’s love for each other and Queen Elsa just discovered that.

Prince Hans will be sent back to his Kingdom and face the punishment while Arendelle ended their business partnership with Weselton. Anna and Kristoff became official lovers, Olaf was a happy snowman in summer time (with Elsa’s magical help of course), the palace gates were never close again, the people respected and accepted the gift there is in their queen and most of all Queen Elsa learned how to control her ice power so she will never be apart from her beloved sister Anna ever again.

Frozen Movie Voice Cast ( Characters with the voices behind)

There’s so much humor in this character. Trust me! The movie wouldn’t end without you learning to love him. I’m so sure the first time you watched this movie you were also worried about Olaf’s melting for his dream summer. He’s soooo adorable and he loves warm hugs! Awwwwww! He’s got the best Frozen lines, quotes, sayings in the movie. I’d say he is the love expert here, not the trolls. Sorry Kristoff 😉 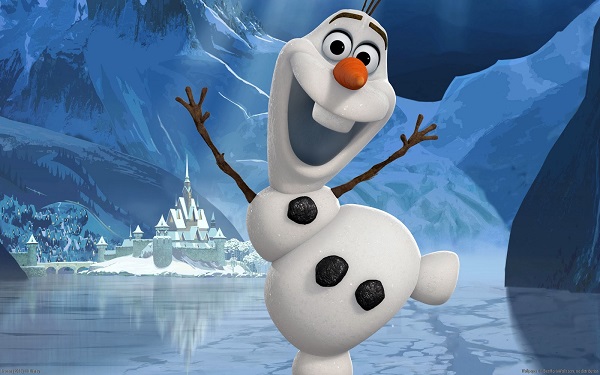 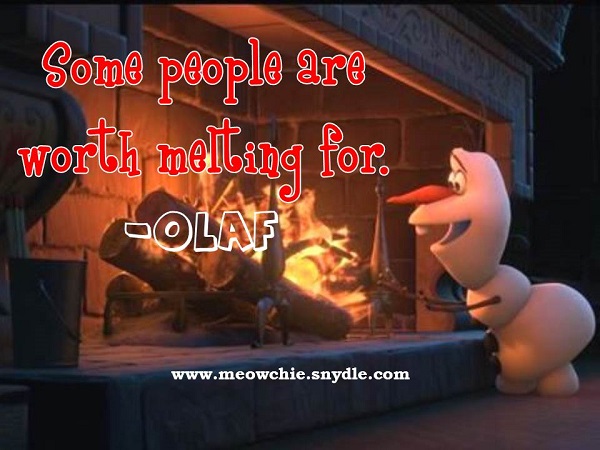 Some people are worth melting for. 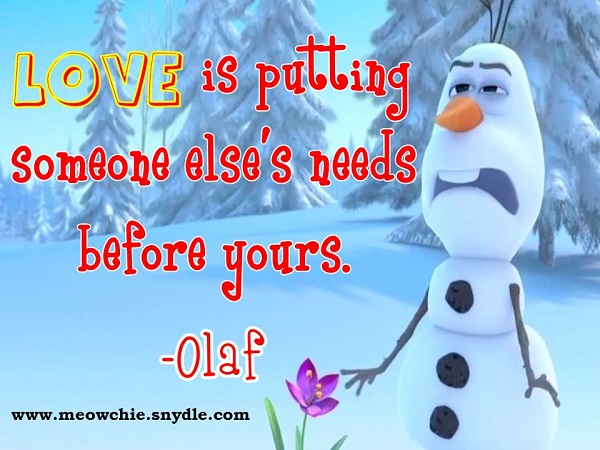 Love is putting someone else’s needs before yours. 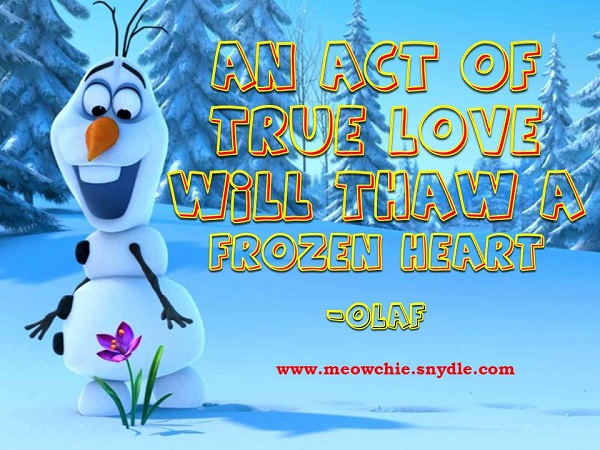 An act of true love will thaw a frozen heart. 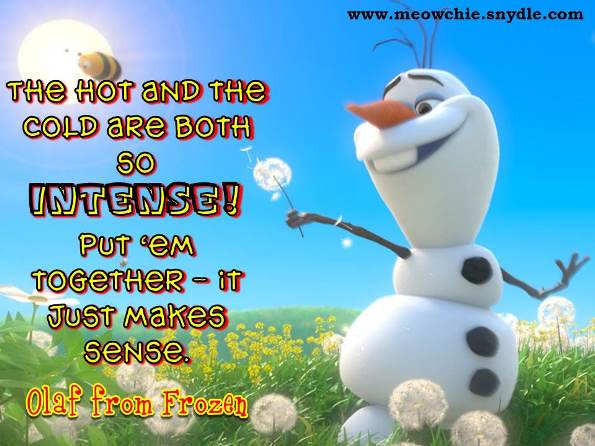 The hot and the cold are both so intense! Put ‘em together – it just makes sense. 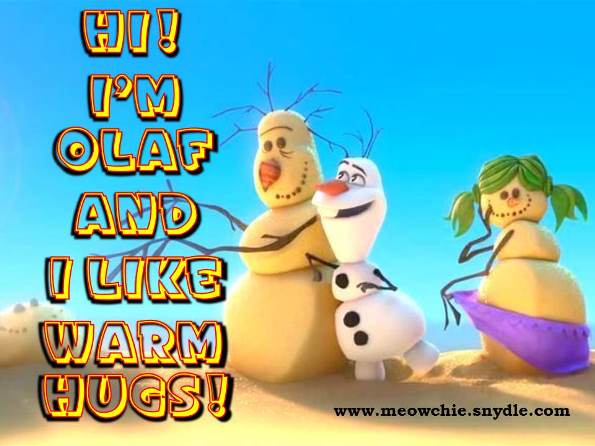 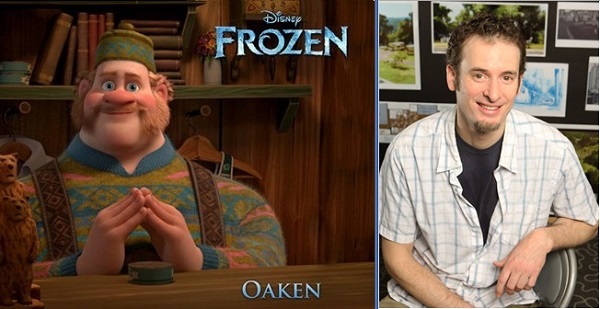 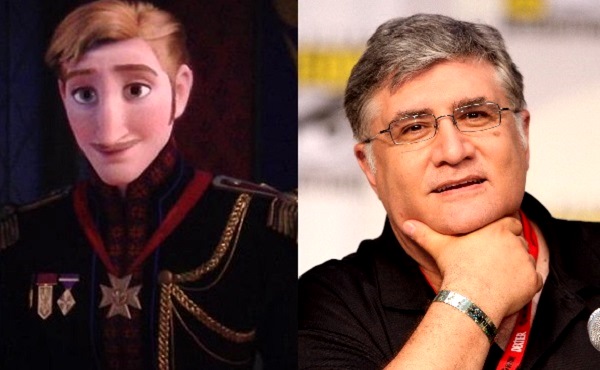 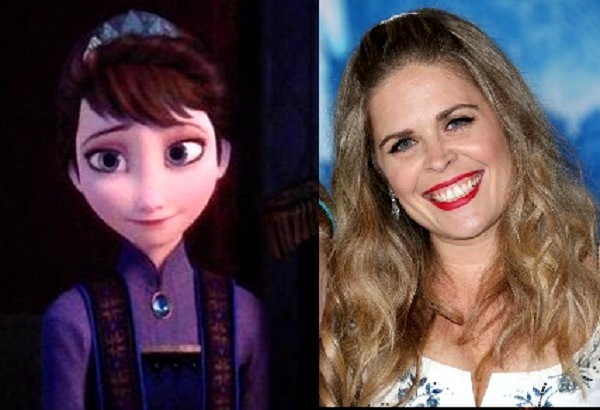 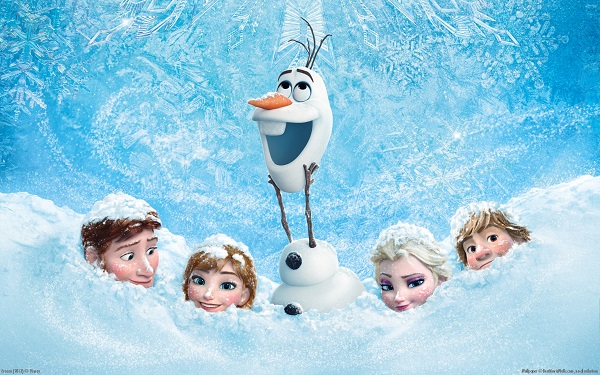 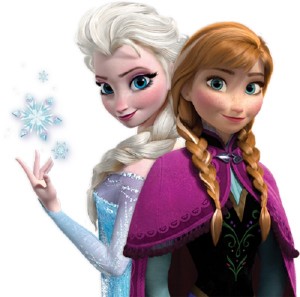 If parents have loved the usual Disney’s princess and prince “Happily-Ever-After” ending, I’m sure mothers and fathers will love Frozen ten times or even a hundred times! Okay here’s my list of the plus points why I consider this film a great one and a must-watch for children, teens and parents. 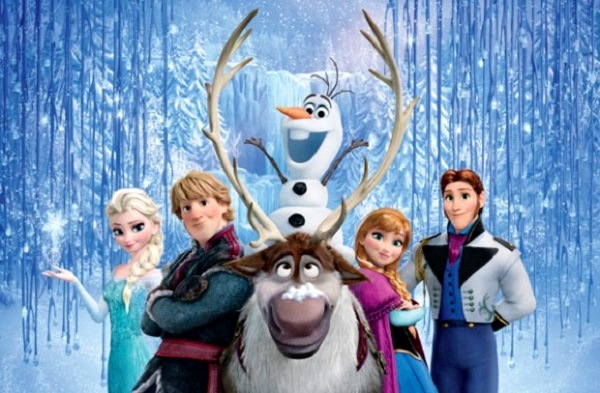 So okay, did you just realize how I adore this movie a lot? I am rating it, uhmmm.. 9/10 because I just wanted a king for Queen Elsa before the movie ended since Anna got Kristoff. Yeah Yeah I know I’ve said having a sister or brother around can be full of love but it would be great to know if someone loved Elsa despite of her extraordinary personality in the movie. Well guys, if you haven’t seen the movie yet I suggest you get a copy now or maybe watch Frozen online. Watch it with your siblings, kids, cousins, nieces or nephews. That would be so so fun! Enjoy everyone and wait for my next post about Frozen Party Ideas since there is a massive craze for this theme lately.